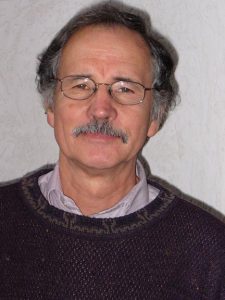 It is always a pleasure to write of prominent Bukovinians of our time and especially so when this happens to be a close relative. While I had been generally aware of the professional activities of my first cousin, Walter Welisch (Bad Griesbach, Germany) and in fact have several of his paintings and graphic productions, it was not until I asked him for specifics about his artistry that I was able to glean a fuller view of his life’s work.

Walter’s parents, Franz Welisch and Eva Hermann, both born in Bukovina in the first decade of the 20th century, were among the 96,000 Bukovina-Germans evacuated to Germany in 1940. It was in the summer of 1945, two months after the end of World War II, that Walter was born in Fürstenzell, Bavaria. After studies in Munich and Augsburg, he taught art in schools in Königsbrünn and Bad Griesbach and between 1989-1995 served as Director of the City Gallery of Bad Griesbach. His paintings have been purchased and are on display at a number of public institutions in Germany. In addition, Walter’s artistic biography has been published in Künstler im Rottal (1993) by Dr. Petra Noll, in Maler, Bildhauer, Designer im Landkreis Passau (1994) by Robert Muthmann, and in Buch der Stadt Bad Greisbach (1995) by Dr. Petra Noll.

Ranging from realism to the abstract, Walter’s motifs originate either within his being or develop while a work is in progress, while background music provides the dynamic and movement for his sketches and drawings. His current emphasis lies in acrylic painting and in print graphics using linoleum blocks and woodcut blocks.