By Pat Stempski (San Jose, CA)
Published by the author in the Bukovina Society of the Americas Newsletter,
Vol. 16, No.3, September, 2006

In this essay Pat Stempski describes her trip to Bukovina undertaken with her husband, Frank whose grandparents had immigrated to the United States before World War I. It was to the land of the grandparents that the couple undertook a journey in September 2004, which took them to the south Bukovinian villages of Solca, Arbora and Suceava as well as to various historic sites along the way. (ed.)

The trip to Bukovina involved a lot of travel time: twenty hours by plane, including layovers each way and another ten hours by train twice to and from northern Romania. However, we did spend a day in Bucharest where we visited the National History Museum (with its concrete and marble replica of Trajan’s Col-umn), a day and a half in Solca, and a day in Transylvania in the Carpathian Mountains where we visited several castles. In Brasov we saw the remains of a Saxon walled city and a Gothic medieval cathedral.

The night train took us from Bucharest to Suceava (Su-châv-ah),the closest town to the village of Solca in Bukovina. Frank’s maternal grandparents, Julius and Barbara Maier (Mayer)Tischinski, had come from Solca and nearby Arbora. They were distant cousins: both of their mothers were Kuffners. Barbara immigrated to the United States in 1909 and Julius in 1910.According to the family, Barbara’s father owned a mill in Arbora while Julius was a cobbler by trade and the son of a small farmer in Solca. Julius was not considered a suitable match for the daughter of a mill owner, so although they were secret sweethearts; theycould not marry until after they came to the United States.

Julius’ father, Stefan, had moved to Solca from Hungary. This could have been as near as Transylvania which was then a part of Hungary. We only know that he came from Hungary, spoke German and had a Polish surname. At the time he moved to Solca, Bukovina was under Austrian administration and remained so until after World War I.

In Suceava we stayed with Gerta Eisenhauer, with whom we had made previous contacts. I was struck by the fact that Gerta looked and dressed exactly like Frank’s grandmother in her later years as I had seen her in photographs. Gerta’s great grandfather had also tried to immigrate to the States in 1910, but he was turned back at Ellis Island for poor eyesight. I thought that Frank did quite well speaking German with Gerta.

We spent the day with Monica and Alex (Gerta’s grandson and his wife), and after she got off work, with Mimi, Alex’s mother. Monica was a pleasant young woman of thirty who spoke French and some English and lived in Suceava with her husband but came to Solca on the weekends to unwind. Monica told us she loved the slow pace of life in her native village and that two days in Solca seemed like a week in Suceava. She hoped one day to retire there. That week she had spent three days in Solca helping with the potato harvest, and we saw evidence that many other young people had returned from the cities to help out on the family farm at harvest time. The young adults in casual city wear were out digging potatoes and posing happily for Frank when he stopped to take their photos. 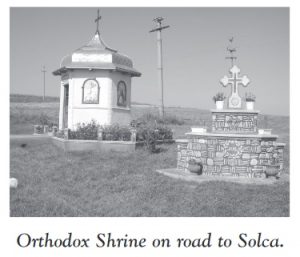 It was humorous to see people out in the potato fields talking on their cell phones because this is still a totally non-technological agricultural society in which all farming is done by hand and with horsepower. (Corn is another staple crop.) There were horse drawn wagons everywhere in the fields and on the roads carrying timber,hay or potatoes. We saw one wagon in Solca pulling a glass-covered hearse with the mourners following behind on foot, first through the town to the Orthodox Church and then from the church to the cemetery. The animals were all well cared for. Very few people had cars. Most got around by walking or riding in horse-drawn wagons or by hitching rides from passing cars or wagons.

The website www.solca.ro seemed to indicate that Solca had been destroyed in the First World War so we were surprised to find many older buildings. We visited the Catholic Church in Solca built in 1850 and the Basilica in Arbora dating from 1904. The priest at the Basilica checked the available church records for Frank’s family without result. Many records had been lost in a fire we were told. We also visited the Catholic cemetery in Solca. This is actually the rear of the Christian cemetery, which is largely Romanian Orthodox. Many of the grave markers had been removed, including those of Frank’s great-grandparents, Stefan Tyszinski and Valeria Kuffner Tyszinski.

Romania is 85 percent Eastern Orthodox and there are at least as many Orthodox churches there as in the United States. Frank read an article in an English language newspaper in Bucharest, which stated that three new churches were being constructed each day.Everyone seems to be reclaiming his religious heritage since the fall of communism. We visited several of the famous painted Orthodox churches of the region.

The countryside was beautiful but most of the buildings were worn down and in need of repair. The people we met generally did not have much income. They lived in modest homes, many without houses. Most young adults were working in the cities or increasingly abroad in Italy or Germany. Our twenty-two-year-old taxi driver, who took us on a day tour to Transylvania, was making about $65 dollars a day as a self-employed worker in the tourist industry. He had previously worked in Italy for a year and managed to save enough money to buy a car in Germany in order to avoid paying a 19 percent sales tax at home.

Since the revolution of 1998, Romania has imposed a sales tax of 19 percent on all goods and the government is considering raising it to 22 percent. This is not a consumer-oriented society, which is just as well since most of the people we saw in the countryside could not afford to buy much anyway. Solca is famous for black pottery but we could not find anything for the grandchildren until our last day, which we spent in the Carpathian Mountains. This appears to be the most prosperous area of Bukovina, where the mainindustry is tourism: castles and medieval towns in the summer and skiing in the winter.

We found people throughout Romania to be friendly and honest and helpful to tourists. A visitor should know that (except perhaps in Transylvania) he should not expect Western standards in hotels and trains, and so on. We would highly recommend that train trips be booked well ahead of time. I would definitely want to make sure I had a sleeper for night train trips. (The day train, however, was air conditioned and quite comfortable in first class accommodations.) The hotels did not provide washcloths, but there was plenty of hot water. The hotel beds left a bit to be desired; however, all the places where we stayed had TVs in the rooms with a news and movie channel in English, although Frank had more fun watching The Simpsons in German and Romanian. The food,which included dishes like sausages, white tripe soup, country fried meats and polenta (corn meal mush) with cheese and sour cream was not our usual fare, but we did not starve, and the vegetables at harvest time were wonderful. Suceava even had a McDonalds. We were told that Bucharest had twelve! Basically we stayed at three-star older hotels of the kind more likely to be frequented by Europeans.

Romanian currency has little value and millions of lei are required to purchase almost anything. Fortunately, the country is scheduled to join the Economic Union (EU), and transactions with the Euro,while not at a favorable exchange rate for Americans, are infinitely simpler. Money changers would only give us Romanian currency fo rour US dollars. For Euros we had to go to a bank. A word of caution: Romanian banks and money changers will not take any wrinkled, nicked or, as they say “dirty” US currency. A German bank in Bucharest agreed to cash a “dirty” fifty dollar US bill for a 10 percent commission. We also had trouble using our bank and credit cards in cash machines. However, we were everywhere able to pay for our hotel rooms, and restaurants in Bucharest accepted our credit cards.

In Romania it is helpful to know a second language; however,people there are working hard at learning English and one can get by with English alone. Throw in a bit of a remembered high school French or Spanish and you will do very well indeed, since Romanian is a Romance language similarly derived from Latin.

The best thing about our trip was that it gave us a real sense of place. It was lovely to see the culture that had formed Julius and Barbara, Frank’s grandparents, and indeed little seems to have changed in the Romanian countryside. Today, nearly one hundred years after they immigrated to the United States, it seemed to us that they could have returned to the old country and fit right in.