By Juanita Augustine
Published by the author in the Bukovina Society of the Americas Newsletter,
Vol. 21, No.4 December, 2011

My Granddaughter Clarissa Rupp, and I took a 10 day trip to Germany, May 16 – 26, 2011. It included visiting rela-tives and friends and also some sightseeing.

We arrived in Frankfurt where Michael Augustin met us at the airport. We were guests of Michael and Bärbel for four days. We did sightseeing in Leonberg and Stuttgart of the Po Tower (largest in Germany), a museum, Mercedes tower and the markets. We visited cemetery where Michael’s mother and brother are buried. In Augsburg we toured the City Hall, which was destroyed during World War II and later completely rebuilt and decorated according to the origi-nal. Our next tour was of the Fuggeri, founded in 1521 as a settlement for needy citizens where rooms still rent for only 0.88 Euros. Our final stop was at St. Ulric Church.

In Salzweg we were houseguests of Michael and Regina Schissel. There we were greeted by relatives Ludwig and Traudl Grill, Alois and; Ressi Schott, Franz and Elizabeth Augustin, Monika Seidl, and Michael Schissel Jr. who joined us for a buffet luncheon.

Michael Augustin and Michael Schissel drove us to Passau where we did more sightseeing including the Mariahilf church, walked the 300 steps of the “Stations of the Cross” and lit a votive candle for my deceased husband Frank. We then drove along the Danube River to where three rivers meet, the Danube, Inn and Ilz, and saw the different colors of each river. We then attended a reunion with 30-35 other family. It was so good to see many familiar faces and to reminisce of the past 10 years Frank and I made our first trip to see them. 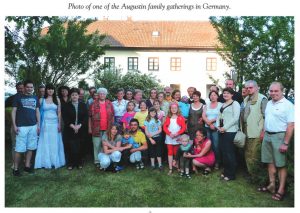 On Sunday morning Regina, Clarissa and I attended Mass at St Stephens Cathedral. It is so beautiful I can’t begin to describe it. After Mass we went to the 100th anniversary of the local brewery. Block after block there were crafts, flow-ers and food from all areas of Europe. Most interesting was the dress of men, women and children of their native land. Later that afternoon we were guests at Ludwig and Traudl Grill for a barbeque with other relatives. Nicole Eller and Fred Wildfeuer, who have visited us in Ellis, joined us.

After shopping and seeing the cemetery where Regina and Michael, Augustin’s grandparents are buried, we went to Alois and Ressi Schott’s home for lunch. Nearing the end of our visit, family and friends gathered to say goodbye. On our final morning we said goodbye to Michael. Bärbel and their daughter Eva drove us to the airport in Frankfurt. It was a very enjoyable and memorable trip to be long re-membered by Clarissa and me, thanks again to our German family.