By Michael Augustin
Published by the author in the Bukovina Society of the Americas Newsletter,
Vol. 20, No.1 March, 2010

“I never would have thought you would be returning to Bukovina so soon,” my friend Roland noted as we were at breakfast in our small boarding house in Gurahumora (Gura Humorului). “Nor did I,” I replied. How did this happen? In search of my roots I undertook my first trip to Bukovina with three friends in October 2008 during which we enjoyed many pleasant and interesting experiences. In early September of this year I was overcome – perhaps influenced by the approaching autumn weather – by a spontaneous yearning and additionally by an in-describable desire again to see this beautiful land with its people and tourist attractions. But can one repeat a trip with such a plethora of emotions a second time without of necessity experiencing disappointment? I called Ro-land, our last year’s guide, and learned that he was already planning to return to his house in Suczawa (Suceava) but was also prepared again to undertake a tour with us. The details were quickly settled: I still had sufficient vacation time, there were reasonable flights (c. 300 euros per person) from Frankfurt via Bucharest to Suczawa, and our rooms at the boarding house of the Corelaru family were available. Now there remained only the question of who would be participating. In that my wife, Baerbel, spontaneously expressed her desire to accompany me pleased me greatly, and my Uncle Franz Augustin from Duisburg, who was born in Ober-Horodnik (Horodnic de Sus) in December 1938 but had never returned to Romania, had been constantly pressing me to undertake a trip with him to his homeland. He accepted my suggestion without hesitation despite the fact that his wife could not accompany him during the time under consideration. Thus the question of the fellow travelers was resolved.

The first phase of the trip proceeded without incident with the exception of a scheduled five-hour layover in Bucharest so that we arrived in Suczawa at 10:30 p.m. and reached our boarding house close to midnight. Nonetheless, our hostess, Vioruca, had prepared a sumptuous meal for us. The next morning we strolled through Gurahumora and concluded that nothing much had changed since our last visit including the presence of a large construction site at the bridge over the Humor Stream. We paid a short visit to the German Forum, where we were hospitably received and shown the building’s facilities (guest room, library, meeting rooms, etc.). Afternoons were spent in Stulpikany (Stulpicani), Negrileasa and even in the former German settlement of Schwarztal (Vadul Negrilesei), accessible only via a road in very poor condition. Aside from the landscape and the villages themselves, we were interested in the churches and cemeteries where we photographed the still existing German graves.

The following Saturday we wished to visit relatives. At this point I must mention that my paternal grandmother (Viktoria, nee Branza) had had a brother Mihai, whose descendants today live in Solka (Solca). My Aunt Traudl in Germany still maintains contact with her first cousin Constantin (Costica) and his family and had already signaled our visit. Unfortunately Costica was in the hospital that day so that we only got to know his wife Veronica and his son Viorel as well as his wife and some neighbors. The family runs a grocery store and a small café on the main street of Solka. We were very graciously received and agreed that we would return after Costica’s discharge from the hospital the following week. The remainder of the day was spent touring the cemeteries and churches in Arbora (Catholic, Protestant and Orthodox monastery churches) as well as the church and the salt mines in Kaczyka (Cacica). At the cemetery of this famous pilgrimage site we had a special stroke of luck: here we sought and found the tombstone of the salt miner Franz Augustyn (31.01.1827 – 16.04.1883) for whom I have still not identified parents despite my extensive databank.

Sunday morning we visited Fürstenthal, this time on a sunny day. Mr. Zaremba, the owner of the lumberyard, recalled our visit of one year ago and took the time not only proudly to show us his installation but also the cemetery, the old school, and the old German houses. Sadly we learned that his mother, Josefa nee Gaschler, had died in February and was laid to rest under the cemetery’s large fir tree. We were invited to have lunch at the Suczewitza (Suceavita) monastery after which we had a tour by a German-speaking guide. The day ended with a visit to Ober-Horodnik, the birthplace of my Uncle Franz, where we also spent some time at the cemetery. There we found no German graves but did see an old wooden church, which gave a very good indication of how the first houses of worship might have looked before they were constructed of stone.

Although the weather was pleasant the following Monday, we spent the better part of the day in the Suczawa Archive. In the late afternoon we toured the city, the famous church of the George monastery (1514-22) and afterwards the stately ruins of the fortification of the 15th century Moldavian princes. 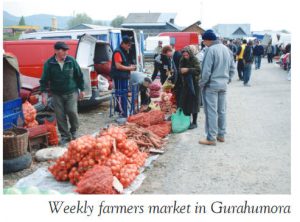 For Tuesday morning we had planned a visit to the weekly farmers’ market in Gurahumora, which was more frequented this year than last and provided numerous sights and scenes worth photographing. We then went to the cemetery and later to a type of amusement park at the border of the city where extensive construction including that of a ski lift and swimming pool is taking place. As the day drew to a close our host, Vasilie Corelaru had organized a special treat for us through his social connections: a drive of about one hour in a very nice open coach drawn through the forest in rapid gait by genuine Lipizzan horses along a narrow-gauge railroad track dating from the Austrian era.

In the meantime we learned that Costica had been discharged from the hospital. We paid him and his wife a visit and accompanied him to the cemetery in Solka (Solca), where, among others, he showed us the grave of his parents. Naturally the visit lasted longer than we had planned, but we still had time in the afternoon for a visit to Radautz (Radauti) and reached the city before sunset and after the rain clouds had dissipated.

On Thursday we paid an unannounced visit to the Moldowitza (Moldovita) monastery where we had the opportunity to see not only the monastery itself as well as its adjacent stables, farm equipment, cattle, etc. When the abbess learned that guests of Mr. Corelaru were here on a visit, she did not let the opportunity escape her of greeting us with wine and cake. We then proceeded to a mountainside pasture (Romanian: stina). In contrast to the 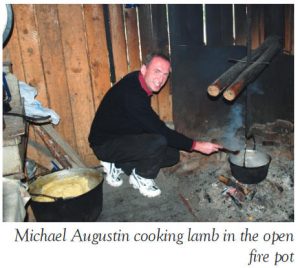 pasture we saw on our last visit, this one lay off to the side in the forest and had remained in a pristine state. And here we were served a native liqueur called zuika and lamb cooked in a vessel over an open fire in a seasoned sauce with cheese and mamaliga (corn meal mush), which we consumed without the slightest consideration of how one could digest this highly caloric meal. Two things are here of worthy of mention: one was a brood of young sheep dogs, which especially impressed my wife, and the other was fact that the owner of the stina, who used a 1.5 meter-long trumpet-like wind instrument to communicate with shepherds across the wide distances, could play it like a virtuoso. After we had begun to recover from our “fatiguing” meal, we undertook yet another extended walk to the village of Bori (Boureni), which from our boarding house lies about one hour by foot between Kloster Humora (Manastirea Humorului) and Gurahumora.

Friday was our last day in Bukovina. The weather was markedly cooler and autumnal. We used the morning for shopping and my wife went to the beauty parlor. In the afternoon we toured the two monasteries in the vicinity, namely those in Voronetz (Voronet) and Kloster Humora The day drew to a close with a long walk to a valley off the beaten path behind the community of Kloster Humora.

Of our return trip it remains to be said that we had to be ready for departure very early on Saturday, that all went as scheduled, that we arrived in Frankfurt shortly before noon, and that at 3:00 p.m. we were again at home in Leonberg.

This trip, which not only went according to plan but was especially enjoyable and interesting, was on a par in hospitality and congeniality with that of one year ago. However, the reader will no doubt discern that for the perfect execution and the unending complexity of our experiences we owe a debt of gratitude to our tour guide, Roland Loy. Without Roland’s organizational talent, linguistic abilities, and familiarity with the area, as well as his connections especially to the Corelaru family and their further contacts and hospitality, this trip would not have been so rewarding and successful.