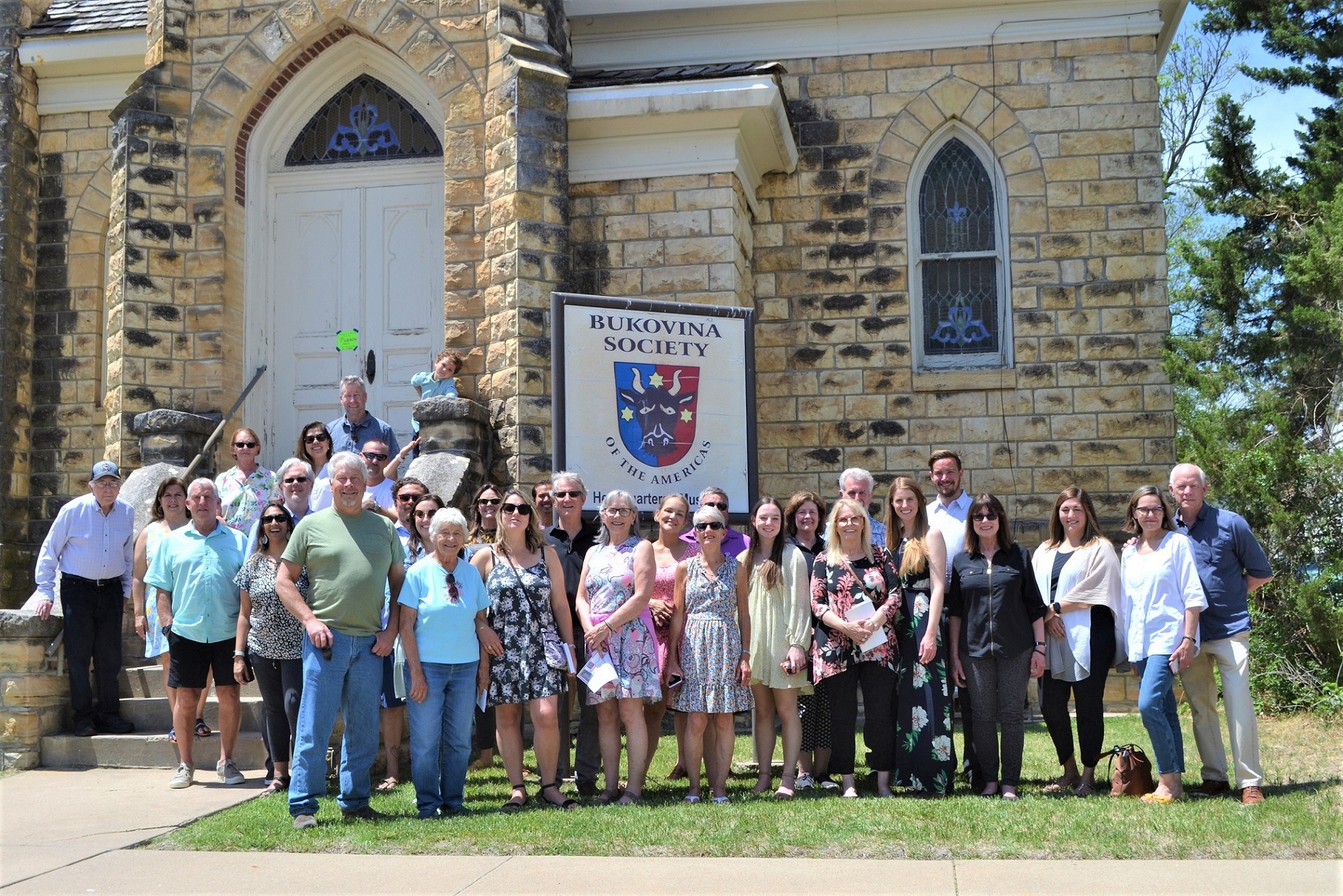 For Kathryn Reber, “Where there’s a will, there’s a way” in tracking down a board member to request a tour of the Bukovina Society museum in Ellis, Kansas. Thanks to a contact with one of the banks in Ellis, Kathryn was able to acquire our phone number. Her desire to make advance arrangements the prior week was successful for the 35 descendants of Joseph and Rosa (Schuster) Fuerch who immigrated to Ellis.

Joseph and Rosa had nine children and on this occasion resulted in five of the families that were able to, attend what has become a family reunion every year. The larger part of the group members were coming from California to include the cities of San Diego, Bowery, Log Beach, Santa Maria, Oakland, Sacramento with Fort Worth, Texas and Anchorage, Alaska. Other cities from Kansas were Overland Park and the group settled and met in McPherson, KS from where their Village Tours stream liner bus would bring them to Ellis.

The first stop was a solemn and celebration of life in the burial of three members of the family being Wally Heisler and two siblings of Rosie Matttson, Robert and his sister Billie. Rosie was the oldest living member here at age 89. The five families represented were Helen, Bertha, John, Joe and Rosie. Helen has some notoriety as being featured in a photo with seven beauty dressed ladies titled Miss Walker Air Base 1943. So the thought springing this photo on the visitors when at the museum would be a neat revelation. For the record it was said, “Helen was voted as having the best set of legs.”

The hope by a number of the family members was whether our most senior Society board member, Joseph Erbert would be here. Joe and Robert were classmates in school as I learned from Joe telling him about the pending visit the week before, I hit town at 9:00 AM with a stop at Joe’s house to tell him we would be on tap for a high noon arrival of the guest visitors. He heard it from his neighbor the night before so I went to unlock the museum doors and wait for all to come.

Turns out his neighbor directly across the alley is Ken and Stephanie (Leiker) Martin. Now, the late radio commentator Paul Harvey would obviously not be on the air at this time, “to tell you the rest of the story.” When the house came up for sale, Stephanie just had to have it. The house was built by none other than Joseph with Rosa Fuerch and raised their nine children in it.

The bus arrives at the museum with a slight delay from touring the former Fuerch home. Crowding in the entry foyer a little blue sticker points out the Fuerch Life members hanging on a wall of the of the society and Cheryl Cox says, with a happy grin, “I’m on there as one of the six names without having a sticker on it.” I was caught up looking for tagging the last names Fuerch among the 290 Life members we have on five plaques. Our first Fuerch member to have joined is Wes Fuerch many years ago.

Over the course of looking items over within the solid hour with some fun and laughter the biggest question put forth was where was the Catholic home village of Furstenthal and are we Austrian Germans or Bohemian Germans? Both terms are relative in that we derive from the Austrian Empire and are Bohemian Germans. Before the Soviet annexation of the northern part (Ukraine) in1940 we became to what is now a part of modern day Romania. 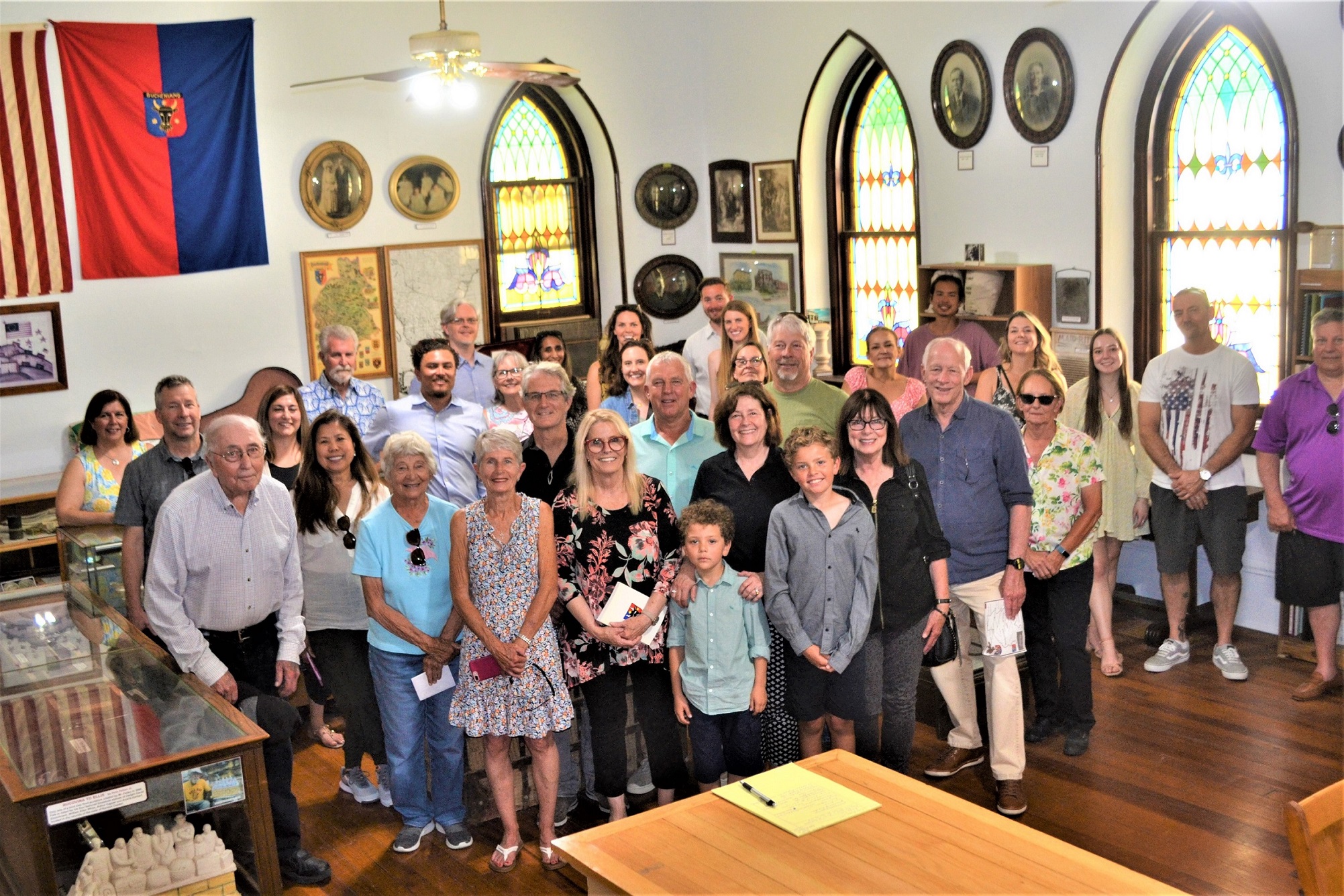 It was neat to see some youngsters in the mix and learned from Doug Heisler he had three grandchildren with him named Beau, Kai and Savannah. However Doug’s sister Diane O’Grady was holding her grandson Declin being at the ripe age of 6 months. A sure bet is that Declin didn’t get much out of this whole event but will learn a thing or two about the history of his heritage and the great family tree he was born into.

We bonded and gained new friends in the society as Joe Erbert and I watched the families board the bus with such dark tinted glass we could not see their faces while tapping our heart with and L sign and thumbs up. Talking later by phone with Kathryn Reber, they were doing the same.